Q&A: Why Vidyard keeps its roots in Waterloo while expanding globally

Vidyard, creator of an innovative online video platform for business, is one of Waterloo’s most exciting scale-ups. It was one of Deloitte’s 2018 Fast 50 and Technology Fast 500 Fastest Growing Companies, and when the Impact Centre at the University of Toronto studied which Canadian businesses had the best chance of becoming a “unicorn,” Vidyard made that list too.

Founded in 2010 as a video production company, Vidyard now serves customers in over 100 countries and has integrations into the world’s largest marketing automation platforms: HubSpot and Marketo.

We sat down with Michael Litt, CEO and co-founder of Vidyard, to discuss why this fast-scaling company chose to keep its operations in Waterloo and how this community is supporting Vidyard as it grows from startup to scale-up and beyond.

Q: As the co-founder of a software company you know the advantages of being located in large tech hubs like Toronto and Silicon Valley. Why has Vidyard chosen to stay in Waterloo?

LITT: Waterloo continues to punch above its weight, there's something different about this ecosystem because an economic analysis does not indicate that we should be this productive. Everything from the blue box to the check engine light, to the mobile Internet with BlackBerry, [was invented in Waterloo].

What you have in Waterloo is a city that's just far enough outside of Toronto to develop its own kind of hub of creativity. Places like the Perimeter Institute help almost up-level the baseline expectation of what it is to be a real contributor to a global industry. On that basis, the people that are here have, on a per capita basis, a higher capacity for impact than possibly anywhere else in the world.

It is easy to have a tangible impact [in Waterloo]. What I mean by that is, if there's something that you don't like about Waterloo, you will have an audience at probably the highest level of municipal leadership. The Mayor of Kitchener, Berry Vrbanovic, is regularly seen at events, is really willing to talk, and ultimately committed to changing some of the things that we see as weaknesses to developing this area. That type of input and impact has been super meaningful to me.

Q: What makes the Waterloo ecosystem different compared to other tech communities like Silicon Valley?

LITT: Silicon Valley is an incredible ecosystem and has built some of the most impactful businesses in the world, but the thing that makes this place so special compared to Silicon Valley is the lack of competition in the talent pool. Which means that you have a much more loyal employee base, which means people are contributing to the same project for longer, which means they're more productive, generally speaking. I think the power of Waterloo is being able to execute here but also leveraging the availability of the network in Silicon Valley, Boston, New York, etc., and bring that collective brain trust and those financial resources back to this region to execute and scale.

Q: How have you worked with organizations like Communitech to further your business?

LITT: Communitech acts like a hub in the Waterloo tech community, they bring world class speakers, investors, mentors and advisors to that location, which then yield their experience onto the companies. We [Vidyard] were a beneficiary of that early on and all the way through. Another thing that Communitech offers is support and understanding on how to navigate some of the government's procurement programs, in grant or loan programs designed to facilitate growth. The Canadian government has earmarked a massive amount of money for this industry and for the sector. I believe Waterloo should get the absolute lion's share, if we're looking at economic productivity on a regional basis, and Communitech tends to be the conduit for that resource.

Q: How have you worked with institutions like the University of Waterloo?

The other amazing thing about the University of Waterloo is that they have this phenomenal co-op program which is definitely best in class, best in the world. Everyone knows the power of a Waterloo student, a Waterloo co-op and the capabilities that these students bring into the workplace. And as new grads they're graduating with two years of work experience, meaning when you're hiring someone you don't have to take them through that transition of being a full-time student to a full-time employee, which can be quite painful. They've been going through that transition, off and on, for the previous five years of their undergraduate career. I think that is probably the most powerful aspect of this community - Waterloo co-op program.

Q: Why is it important to you to maintain and help assist the promotion of entrepreneurial activity within Waterloo?

LITT: Going through the process of starting a company here to today, I witnessed all the challenges we had and whenever possible, I enlisted the support of the individuals that were responsible for creating changes or offering the programming, to fill in some of those gaps. Where those gaps weren't filled, I've gone and tried to fill those gaps myself. One of the gaps is we don't have a sophisticated, seed stage, investment fund in Waterloo; they’re in Toronto, they’re in Boston, they're all over the world, but there's none in Waterloo. So we started one, and on that basis we have now made just over seventy five investments. We've deployed just over, I want to say, twenty two million dollars in capital in this region to build these businesses and fill that gap that we had. We had to go and find our seed money in Silicon Valley and I don't want that to be the future forever. By funding this pipeline of companies, now there is going to be more businesses that have more talent which will create more competition in the ecosystem, but will ultimately yield better results. Because the best founders, the best ideas and the best executors will ultimately rise to the top.

I've been spending my career now going to Silicon Valley and seeing how the proliferation of tech wealth has had a negative impact on that community. Gentrification, obviously, has moved a lot of people out of their homes and made San Francisco an unaffordable place and with that a lot of the vibrancy has left San Francisco. I realized that there was an awareness gap and if we weren't responsible for helping solve that then we were likely to create an ecosystem very much like San Francisco that ultimately didn't care. And I don't want to live in a place like that.

Q: What is your opinion on the level of talent in Waterloo?

LITT: I would rank the Waterloo talent pool amongst the best in the world. Waterloo talent has the capacity to think on a global scale and is loyal to the cause that they choose. Which is very important because without that loyalty, I don't think Vidyard would be a fraction of the company that it is today.

Q: How has the Waterloo community assisted you as a scale-up?

LITT: When we've raised money from US investors and had to justify being in Waterloo, it's always been “look this ecosystem supported an 80 billion dollar business [BlackBerry] that invented the mobile Internet and a lot of the people that were part of that journey are still there.” And so one of the amazing things about our growth in building to a global customer base and achieving real global impact has been working with people that have been part of that at other companies before.

Q: Why should companies invest in Waterloo?

LITT: I think companies should invest in Waterloo because there is a talent pool here that is thinking on a global scale and is ready to solve the global problems that companies elsewhere in the world might be focused on but might not have the talent availability to do so. 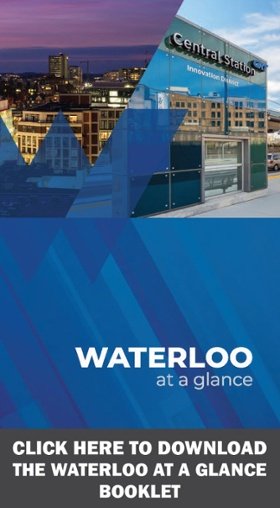 Our government just implemented, in the new budget, the permanency of a program called the Global Talent Stream. Which is exciting because, if you are a Canadian company and if you're located in Waterloo your company gets pre-approved for certain job codes. You can immigrate, let's say a data scientist from Sweden, into the country in two weeks because your company's pre-approved on a specific job code. Versus you know, six to twelve months anywhere else in the world and so for immigration we have focused resources and focused time in Canada. It is probably the best immigration policy in the world.

I believe that in Waterloo, you can build a globally impactful company, at the same rate and the same scale as anywhere else in the world. And you can do it in a way that is considerate of your impact on the community because the Canadian culture is much more oriented around bringing everyone along with you. And so I don't think we'll see the same wealth gap in Waterloo, over time, that we see in areas like Silicon Valley. And that's the type of ecosystem and community that I want to be a part of for the rest of my life.

Q: What advice would you give to companies questioning starting or growing their business in Waterloo?

LITT: I think if you're considering starting or growing a business here you have to come here and invest in getting to know the ecosystem and how it works because no ecosystem is the same. If you come to Waterloo expecting to see Silicon Valley of the North, first of all, you'd better bring a winter coat. And secondly, it’s not the same in really any regard. We are a much tighter ecosystem, within a 10 kilometre or six mile, radius of this building [Vidyard Head Office], every single startup operating in this ecosystem exists - it's not spread out over a massive landmass. And so the density is something that you almost have to see to believe, you have to walk the streets, you have to meet the founders, you have to understand the benefits and the downsides of this ecosystem to truly make an investment. An organization like Waterloo EDC is essentially designed to help bridge these gaps and help bridge the gap between your understanding of your ecosystem versus what exists here in Waterloo.