Magnet Forensics wants to make it harder to get away with crime.

With a goal to transform policing and public safety for the 21st century, Magnet Forensics develops and sells digital-forensics software to over 4,000 government agencies and other organizations with investigative authorities in 93 countries worldwide.

Headquartered in Waterloo, the company specializes in “digital investigative technology.” Essentially, its software locates important data for investigations. One example would be online chat “artifacts”—that is, older digital conversations existing in a physical computer’s or smartphone’s memory, even if users think those conversations have disappeared from their phones or laptops. That digital evidence is then used to build stronger cases against perpetrators and exonerate the innocent.

To date, Magnet Forensics’ software has been used by authorities in all sorts of cases—from child sexual exploitation to assault, domestic disputes, online threats and bullying, other violent crimes, and even counter-terrorism. One of its most high-profile cases where its software played an integral role was in the Boston Marathon bomber investigation.

A true local success story, Magnet Forensics was founded by Jad Saliba, a Waterloo Regional Police constable who—after surviving Stage 4 cancer—later re-joined the police force in its high-tech crimes unit (often referred to as digital-forensics in other agencies). It was there that he began working on the technology.

“Back then, there were no quality tools to assist investigators in the recovery of the new forms of evidence that were becoming integral to investigations like social media, and Jad believed he could make a positive impact on community safety—which led him to begin working on creating software for his colleagues in policing,” says Adam Belsher, CEO of Magnet Forensics.

Eventually, Saliba decided to strike out on his own and sell the software for a licensing fee. He partnered up with Belsher (then a BlackBerry senior executive), with whom he shared a goal of working for the public good.

In its early days, Magnet Forensics’ home base was at Waterloo’s Accelerator Centre, an organization specializing in mentoring and financing assistance for local startups. “The Accelerator Centre focuses on business fundamentals and hitting your milestones within a set period of time, which has helped a lot of companies like Magnet Forensics to scale quickly,” says Belsher.

That was in 2011. Since then, the company has moved twice to accommodate its growth.

Today, Magnet Forensics’ Waterloo location is home to approximately 75% of the company’s 200-plus employees, including the majority of its executive team. There, they work on R&D, product management, customer support, sales, marketing, and operations.

The Canadian market comprises less than 10% of Magnet Forensics’ customer base.

“The real opportunity for Magnet Forensics in Canada is to work more strategically with local, provincial and federal agencies to tackle the growth in cybercrime and cyber-enabled crime in a manner that uphold Canadians values like privacy and the rule of law while ensuring victims get justice and the innocent are not wrongly

convicted,” says Belsher. “That sort of public-private partnership is both a leadership opportunity for Canada and an opportunity to create prosperity for Canadians by taking those solutions to global markets.”

He points to the United States, where there are over 18,000 police agencies throughout the country.

As the company introduces multiple new products, Magnet Forensics continues to expand its global footprint. Currently, it has sales and training office in the Greater Washington (D.C.) area. The company also has presence in the United Kingdom, Singapore, Mexico, and Germany; a R+D office outside Ottawa; and recently acquired a company in The Hague (Netherlands) where they also conduct research and development.

Meanwhile, its client base continues to extend outside police forces. Intelligence agencies, tax officials, border guards, militaries, and many other public and private organizations are increasingly looking for efficient ways to get critical evidence from computers and smartphones—with an increasing number looking to Magnet Forensics for help.

“We’re finding new partners in policing and other security agencies with high frequency. I believe they want to work with Magnet not only because of our technology but also due to our mission orientation.” says Belsher. “It’s all part of the bigger picture for making the world a safer place.”

According to Belsher, Waterloo is an ideal fit for scaling technology-intensive businesses for a number of reasons. 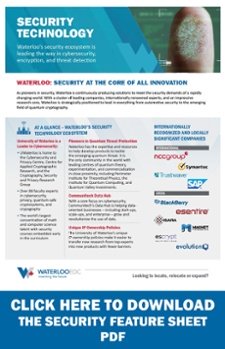 “Balancing great development with business functions and great management is important. Waterloo has been a very successful place in terms of producing quality talent on the technical as well as business sides,” he says. Many of the company’s employees have come from the University of Waterloo and Conestoga College and a number of the company’s leaders have served in leadership roles with other Waterloo-area technology companies.

He also points to the area’s experience in dealing with startups and scaling on a global level.

“With companies like Blackberry in the region, you meet people all the time who have had expertise with scaling up companies, and their insight is really valuable because it can help you avoid pitfalls in your own business,” he says.

“Understand your value proposition, including your mission and vision, and make sure to communicate it clearly when you’re seeking employees,” he says. “Businesses are competing for top talent both locally and globally, so you want to be sure you stand out. Meanwhile, consider how each person you hire can help you scale-up and compete globally.”

Want to learn more about the Waterloo security ecosystem? Download our security cluster map now! This map provides a listing of all 50 security businesses in Waterloo as well as a list of the research and commercialization supports available to businesses in our community.