Waterloo is at the epicentre of the quantum revolution – and has been for more than twenty years.

Nicknamed “Quantum Valley,” our complete theory-to-commercialization quantum ecosystem is high-density, collaborative and world-class. In our community, there are more than 250 researchers working in quantum theory at our top research institutions, which includes two of the world’s largest quantum-related physics research centres.

The Institute for Quantum Computing, located at the University of Waterloo, is one of the world’s largest quantum technology research institutes. IQC has several core research areas, including quantum computing, quantum communication, quantum sensing and quantum material, and holds the world record for number of universally controlled qubits. The institute has plans to expand to more than 30 research groups and 30 faculty positions, alongside 50 postdoctoral fellows and 125 students. 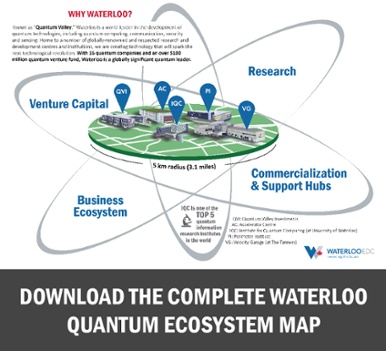 Transformative Quantum Technologies (TQT) is a collaborative research initiative led by IQC and the University of Waterloo that accelerates the development and deployment of quantum devices globally. They work with companies in the community and across the country to develop quantum technology and applications that deliver societal and economic benefits.

Quantum Valley Investments provides commercialization funding, expertise and support for researchers that develop cutting-edge technologies and applications in Quantum Information Science. The Quantum Valley Fund is $100 million and is invested at the direction of QVI Managing Partners Mike Lazaridis and Doug Fregin – both formerly of Blackberry – with the guidance of the four world-class scientific minds on the organization’s Scientific Advisory Committee.

Located at the University of Waterloo, the Quantum-Nano Centre is a state-of-the-art research and development laboratory for quantum information science and nanotechnology, housing more than 50 researchers and more than 100 graduate students.

There is room here for your success. Contact us to join our thriving ecosystem.