Quantum Benchmark is at the leading edge of the quantum revolution

Quantum Benchmark, a Waterloo startup launched in 2017, is getting ready to power the age of discovery about to be unleashed by quantum computers.

The company now employs 14 people and is part of Waterloo’s vibrant and growing cluster of quantum computing companies.

Quantum Benchmark’s software helps to identify, suppress and overcome errors that are inevitably a part of quantum computing, and validate the accuracy of the output.

The software is already being used on prototype quantum computing platforms built by technology giants such as Google and IBM.  But ultimately, the software will also help a wide variety of enterprises tap into the potential of quantum computers as tools for discovery.

Quantum computers are powerful because they utilize the strange properties of fundamental particles at the heart of nature to find shortcuts to solving problems that are too big and complex for conventional computing. “It really is all about opening up new pathways to reach or solve a problem,” says Joseph Emerson, Quantum Benchmark’s Chief Executive Officer and Founder.

As quantum computing platforms become commercially available, a wide range of enterprises will be eager to take advantage of them, whether it is in the design of new drugs, the development of exotic new energy-efficient materials or batteries, or new opportunities in risk assessment and trading in the financial sector.

Quantum Benchmark’s software will help them leverage that power by improving the capabilities of the hardware to solve a broader range of problems.

Growing in a quantum ecosystem

Emerson was a postdoctoral researcher at the Massachusetts Institute of Technology in 2003 when he was pulled into what was then a budding quantum computing ecosystem in Waterloo.

At that time, quantum computing was “still at the margins of physics,” Emerson says, yet Waterloo was turning itself into an impressive hub of research in that field.

Inspired by the vision of Mike Lazaridis, the inventor of the BlackBerry, about $1.5 billion in private and public sector investment was bringing world-renowned quantum computing experts to the region.

“I knew both Perimeter and the Institute for Quantum Computing were putting a big effort into building up teams of people with expertise in that area and I was excited to be involved in that,” Emerson says.

Emerson, who was born in the United States but grew up in Montreal, also saw it as a chance to return to Canada while at the same time pursuing his passion for quantum computing. He has become a world expert in mitigating errors in quantum computing hardware.

In early 2017, Emerson felt the time was right to launch a quantum computing software company.

“Big advances in the technology had led to a big influx in public and private investment into quantum computing hardware, and at the same time, my team and I had discovered some very enabling technology to help with that development,” he says.

Emerson and co-founder Joel Wallman, who was also a researcher at the University of Waterloo, started Quantum 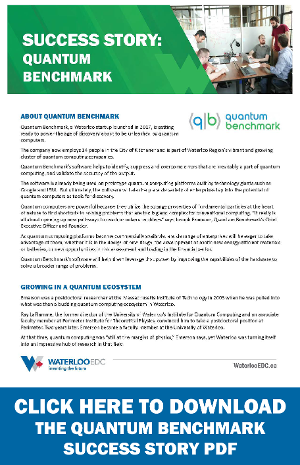 Benchmark with their own funds and then secured an initial $1-million round of financing from Vancouver-based Vanedge Capital Partners Ltd.

Waterloo is an ideal location for the startup, Emerson says.

Access to talent is the primary reason for rooting the company here. “What we have here is probably the world’s best concentration of expertise in terms of the people who are well-equipped to solve problems in the quantum computing field,” Emerson says. The region is also rich in other software development expertise that is important for the company, he adds.

But there are other advantages as well.

“It is a great place in that it is similar to Silicon Valley with its deep expertise, but it is also much more affordable in terms of the cost of living,” Emerson says. “You can have a small city with a lot going on and a reasonable cost of living, but with a great ecosystem for a startup. You can enjoy life and also do something really interesting career-wise.”

Recently, Quantum Benchmark moved from shared space in the Google office building to its own headquarters just above a local coffee roasting company. “My investors from Vancouver can’t believe that we can have such a nice space at such a reasonable cost compared to Vancouver,” he says.

As quantum computers become more reliable, the market, either through software licensing agreements directly with enterprise customers or through the quantum computing cloud networks that serve that customer base, will likely to be huge, Emerson says.

“Quantum computing is a disruptive technology that enables solutions to problems that are well beyond the reach of conventional computers, and that will lead to a massive acceleration of progress in many areas,” Emerson says.

Not only can it accelerate discovery in areas like new drug development, novel materials, energy, banking and other huge sectors of the economy, but it may also find uses in applications where machine learning and optimization are coming into play, such as managing traffic flow or optimizing transportation schedules, he adds.

“With any technology that is new and enabling, people come along and find ways to apply it in contexts that you had never imagined,” Emerson says.

How can our unique theory-to-commercialization quantum ecosystem help your business grow and innovate? Contact us! We can give you an overview of our quantum community – including education, research hubs and businesses – and make connections that can help your business adopt quantum technologies.