Spring has sprung in Waterloo – bringing renewal and growth across our community.

In March, we saw substantial new investments in tech and startups, news about our booming population and an impressive increase in air traffic.

Here are the top stories from March 2022:

Waterloo named one of the fastest growing communities in Canada

Waterloo Region is a growing ecosystem and the latest Canadian census data confirms it – from 2016 to 2021 Waterloo Region has seen a population growth of 9.9%. With a diverse economy and dynamic tech ecosystem, hosting a mix of tech giants like Google and Canada’s rapidly growing companies like Faire and ApplyBoard, there’s no doubt as to why Waterloo is one of the fastest growing communities in Canada.

With all the growth that Waterloo has experienced, it makes sense that the Region of Waterloo International Airport (YKF) is getting busy.

Statistics Canada’s annual Aircraft Movement Statistics Report ranked the Region of Waterloo International Airport the 6th busiest in Canada in 2021 with a total of 133,293 aircraft movements.

This ranking is a big jump from the 15th and 16th busiest rankings that YKF has held for the past few years.

Canada saw a drastic increase in Foreign Direct Investment (FDI) in 2021. FDI inflows reached their highest mark since 2007 at $74.8 billion; this number also represents a 141% increase from the FDI inflow from 2020.

These numbers from Statistics Canada, and reported by Invest in Canada, highlight that Canada’s largest trading partner, the United States, was the largest source for FDI in 2020’s Q4. The US provided 50% of total FDI inflows with investments amounting to $37.6 billion.

Canadian tech startups raise record-shattering investments of $14B in 2021

Canadian startups continued to thrive and grow in 2021. According to briefed.in’s annual tech report, Canadian startups raised a record-shattering $14 billion across 698 deals in 2021. This represents a 31% increase in investment dollars from 2020.

According to BetaKit, Canada continues to see investment from the US as “nearly 60% of the investment firms involved in Canadian deals were from US investors.”

Waterloo-based healthtech startup, MedMe Health has received $2.7 million USD from Microsoft’s M12 venture fund in seed funding, which they plan to use to double or triple their team from the current 50 employees.

MedMe Health, which has helped 3,600 pharmacies book COVID-19 vaccines and tests, is a testament to the innovation that comes out of Waterloo Region as the first-time entrepreneurs completed the accelerator program through University of Waterloo backed accelerator Velocity.

Rui Su, one of the three co-founders, says MedMe’s vision is to “transform pharmacies from dispensing locations to health-care hubs.” 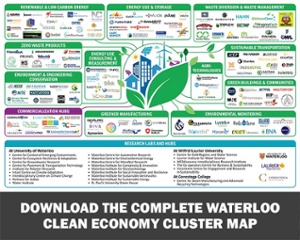 Waterloo Region businesses are leading the charge when it comes to working on clean solutions. The Waterloo Clean Economy Ecosystem Map – a joint effort by Sustainable Waterloo Region, WR Community Energy, the Region of Waterloo and Waterloo EDC – illustrates the 120+ companies, post-secondary institutions and organizations working on problems of efficiency, conservation and more.

As the world continues to experience rapid change, businesses are continually thinking of how to evolve their way of work.