Founded in 2015 in Waterloo, ISARA Corporation is not only part of the region’s growing high-tech sector: it’s also the largest company of its kind worldwide.

ISARA develops quantum-safe security software that can be embedded into commercial products to secure data—now, and in the future. As such, it is leading a global collaborative effort to protect companies from the emerging quantum threat.

ISARA is headquartered in Waterloo with approximately 40 employees, and recently opened a small sales office in Silicon Valley, as well as an office in London, England, to collaborate with European partners.

A long-time local resident and former BlackBerry and Huawei executive, ISARA CEO and co-founder Scott Totzke had good reason to choose Waterloo Region as the company’s home base. 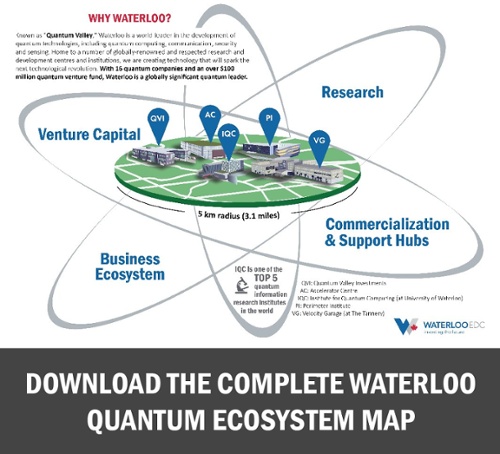 First, the region is serious about quantum computing.

Over the last 20 years, approximately $1.5 billion in private and government funding has been invested in Waterloo to build out areas of quantum information science. Moreover, the University of Waterloo is home to the world’s largest math faculty—including the Institute for Quantum Computing.

Having worked in the local high-tech community for several years, Totzke also knew there were already many highly skilled mathematicians and engineers in the area.

“So we already had talent here, available capital, an industry that had been working on quantum computing very publicly for almost two decades, and so many opportunities to bridge business with all the pure academic research work being done in the region. That sort of ecosystem has enabled us to grow to where we are today,” he says.

“As a result, I really don’t think we could have set up headquarters anywhere else in the world.”

Part of something bigger

Totzke admits he could have been a “brain drain” Canadian statistic—that is, leaving Canada to build his business in Silicon Valley.

However, he is glad the reverse happened.

“I’m quite gratified that ISARA is part of this narrative about how Waterloo is creating a very robust tech cluster,” says Totzke. “This is an extremely vibrant start-up tech community, full of super talented people—and it’s been fascinating to watch the region grow and create opportunities for people to participate in this growth.”

Over the next decade, ISARA will focus on how to help the world shift to next-level security.

“I feel honoured to be part of a new set of companies solving these really big problems in Waterloo and being part of the region’s ‘next chapter,’” Totzke says. “Meanwhile, we can keep our amazing talent here, leverage the qualified skill sets we already have in the region, and build an increasingly rich ecosystem that drives innovation.”

“The region has become a lot more diverse in recent years, and it’s changing into a much friendlier place than you would expect for an up-and-coming area,” he says. He surmises that the friendliness also has to do with Waterloo’s smaller-town “feel.”

“Because we’re still kind of a small city, Waterloo lends itself to a better work-life balance approach,” he explains. “You’re not spending hours in your car; my commute to work is only 12 minutes. And there are a lot of family-friendly aspects to the city, including walking trails and parks.”

“Living and working here, I can participate in an emerging ecosystem of really cool high-tech companies, do that with a short commute, and get all the other amenities being built into the region. When you add it all up, Waterloo
becomes a pretty attractive place to be.”

'Must know' advice for getting noticed

Totzke has two important pieces of advice for businesses that want to set up in Waterloo.

“Even if you’re starting from nothing and want to put someone here in Waterloo to open an office, it’s important to find that right senior person in the region—someone who already established here and who understands how everyone works together here, who understands entry markets and dealing with regulatory issues, to help with everything from recruitment to operations,” he says.

“We’ve received a ton of help from Waterloo EDC. They helped us set up our office here; and they understand all the trends about what’s going on in the area, including any businesses that are coming here that you may want to talk to about selling your products and services.”

“Waterloo EDC has helped us secure focused, hour-long meetings with Tier 1 car manufacturers, where we’re chatting with them about their security portfolios,” says Totzke. “These meetings probably would have taken at least a couple of years for us to arrange on our own. Without Waterloo EDC, we may never have shown up on the radar of some of these people.”