Four reasons Waterloo was the best place for HockeyTech to score

When Stu Siegel, former CEO/Owner of the NHL’s Florida Panthers, realized they were not using tech or analytics to improve the way the hockey team was playing, he began digitizing and data-basing player data, sowing the seeds of what would later become HockeyTech.

After acquiring other tech companies working in hockey analytics, Siegel began looking for a single space to house his growing staff and continue to develop new products – he chose Waterloo.

Here are four reasons Waterloo was ideal for HockeyTech’s expansion: 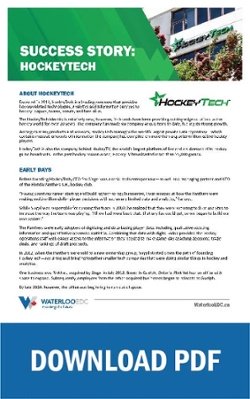 One big reason to locate in Waterloo was more direct access to students from its post-secondary community. The University of Waterloo, for example, is home to Canada’s top-ranked Computer Science program and the world’s largest co-operative education program.

“Together with the University of Waterloo, we’ve set up some great co-op programs,” said Siegel. “We’ve also hired business graduates from the Wilfrid Laurier University, and hired graduates from Conestoga College, which has a big broadcasting program.”

Waterloo also has a strong experienced talent pool. In a recent report, CBRE called its unique combination of talent quality and cost “exceptional.”

Siegel also wanted more direct access to the University of Waterloo, where a number of professors were already researching hockey analytics and technology.

This partnership has led to the testing of multiple new technologies. One such test included embedding sensors in players’ equipment to track the position of every player at all times on the ice—creating millions of data points for analysis within a single game. 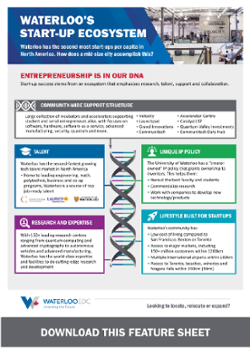 Siegel credits the local tech ecosystem as another reason for HockeyTech choosing Waterloo.

“The whole region just seems to really have it together when it comes to helping businesses acclimate and feel welcome—and they really make an effort to provide resources,” said Siegel. “The public-private-education triangle really works in Waterloo, better than any other place I’ve ever seen.”

This ecosystem includes education and research assets like the University of Waterloo, as well as commercialization hubs like Communitech and Catalyst137, incubators like Velocity and the Accelerators Centre, and extensive peer-to-peer networks covering all aspects of tech business.

With one of HockeyTech’s biggest acquisitions coming from Boston, a large percentage of Siegel’s employees are American. Moving to Waterloo had an unexpected benefit for his team.

“They picked up and moved to a different country, and they seem to love it here,” said Siegel. “Coming from Boston, which has a very high cost of living, they’ve had the advantage here of a lower cost of living—not to mention the advantage of currency conversion.”

For companies looking to expand their tech business, Siegel sums it up Waterloo perfectly:

“If you’re looking for an environment that’s like a Silicon Valley but a little warmer in personality, I think Canadians tend to be easier and more courteous to work with.”