February brought a storm of tech funding and cybersecurity success to Waterloo.

This month, a flurry of funding raises for companies like eSentire, DOZR and RideCo descended on our community, while exciting announcements regarding research and rapid growth in Waterloo made headlines.

Here are the top stories from February 2022:

There’s a new unicorn in town. eSentire, a local cybersecurity innovator, recently announced a $325M financing deal that will propel the company to a $1.1B valuation. With the new funding, the company plans on expanding its operations to Europe and the Asia-Pacific and hiring 400 new employees in the coming months. A recognized leader in the managed detection and response (MDR) space, eSentire is the fourth Waterloo company to become a unicorn in the last couple of years.

Cybersecurity innovation in Canada propelled by $80M in funding

New government funding is helping to advance Canadian leadership in cybersecurity. The National Cybersecurity Consortium (NCC) is set to receive $80M to lead the new Cyber Security Innovation Network, which will support further R&D, increase commercialization opportunities and develop skilled cybersecurity talent across Canada. The University of Waterloo, one of the five founding members of the NCC, will play a large role in strengthening Canada’s global cybersecurity leadership.

“Waterloo is uniquely capable at turning information and communication technology research into effective cybersecurity and privacy solutions and innovations that create economic advantages for Canada,” said Vivek Goel, President and Vice-chancellor of Waterloo.

Canada named the fastest growing country in the G7

Canada is the fastest-growing country in the G7. In fact, earlier this month, Statistics Canada reported that Canada’s population grew at almost twice the rate of other G7 countries from 2016 to 2021. The report also highlighted Canada’s rapid urbanization. For the first time in 30 years, all urban centres across Canada experienced positive population growth. Among those flourishing cities is Waterloo, which remained one of Canada’s fastest growing communities.

DOZR, a fixture in Canada’s fast-growing construction tech sector, raised $27.5M CAD in Series B funding this month. The company provides an online marketplace for the rental of heavy equipment.

RideCo is changing the way people get around their communities with on-demand transit software that creates dynamic routes for buses and other types of vehicles. The Waterloo-based company recently raised $20M CAD in Series A funding and the capital will be put toward further development of its product, accelerating the future of transit around the world.

RouteThis Inc. is a local startup that offers Wi-Fi connectivity technologies. Their $25M CAD in Series A funding raise will allow the company to expand its product offerings, double its existing workforce and operate in new markets.

Waterloo EDC President & CEO on the future of business expansion 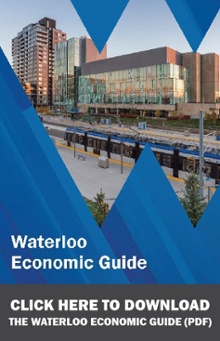 Tony LaMantia, President & CEO of Waterloo EDC, was featured in articles by HR.com and fDi Intelligence this month to discuss the future of remote work and the principles of recruitment and business expansion.

“The long game is still collaboration, physical space and a community brand presence,” said LaMantia. “The bottom line is you can’t really take advantage of an ecosystem and what it offers if you’re 100% remote.”

Conestoga College, a top polytechnic institute in Waterloo, was named one of Canada’s top research colleges in a new report from Research Infosource for research excellence in smart manufacturing, supply chain management and food processing.

The Lazaridis School of Business and Economics at Wilfrid Laurier University was also recognized this month for research excellence, ranking among the top 10 schools in Canada for accounting research.

This month, we released a new overview of our international expansion services for those interested in joining our community. Since 2016, Waterloo EDC has helped companies invest $1B in our community, including helping foreign-owned businesses with local facilities expand and helping new entrants make a soft landing.