In the midst of December’s hectic holiday rush, Waterloo saw a plethora of newsworthy announcements from our business and technology community. To wrap up the decade, the University of Waterloo shared some exciting news, our AI business community continued to affirm its growing strength and Waterloo garnered some exceptional recognition from a federal minister.

Here are eight business and investment stories from the last month:

Early in the month, UWaterloo launched The Quantum Alliance program. The first-of-its-kind initiative is designed to ignite collaboration between academia and industry, bolster Waterloo’s quantum R&D community and bring early adopters together with experts in a shared development space. With news like this, it’s evident why Waterloo bears the title ‘Quantum Valley’. For full coverage, check out Betakit’s article.

Telecommunications giant Rogers is preparing to ignite the first 5G network in central Canada – made possible by a research partnership with the University of Waterloo. Read Rogers’ official news release to learn how, together, the two will advance 5G research in the Toronto-Waterloo tech corridor and create the first 5G smart campus in central Canada. Earlier this year, Rogers opened their 5G innovation lab in Communitech’s innovation alley. 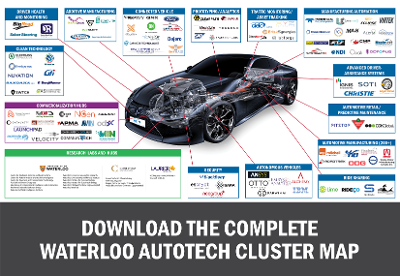 3. Mapping the world – and Waterloo Region – with AI

Ecopia.AI, a graduate from Waterloo’s tech start-up community, is developing a project anticipated to create a template for autonomous vehicle mapping. The team has imaged every road in Waterloo and software engineers will translate these images into maps for AI-enabled cars to interpret. For the full story, read Communitech’s article and to learn more about the immense impact of Waterloo’s AI business community, read this Q&A.

A recently published report for the Japan Automobile Manufacturers Association of Canada found that Japanese-branded automotive manufacturers produced close to half of all cars and light-duty trucks made in Canada in 2018. Toyota Motor Manufacturing Canada accounted for over half of that output, producing nearly 500,000 vehicles last year. We wrote a piece about the report and for the original story, read The Record’s article.

5. University of Waterloo gets $2.1 million from Toyota

The academic institution was gifted $2.1 million from Toyota Canada – the largest ever grant given by Toyota to a Canadian university. UWaterloo plans to allocate the funds to finance an undergraduate engineering innovation challenge while supporting a variety of student research and outreach initiatives. Read Global News’ coverage on the story.

Ontario’s Minister of Labour, Training and Skills Development, Monte McNaughton, visited Waterloo’s Communitech in December to announce a $20 million contribution to the Skills Catalyst Fund. The fund supports the development and implementation of innovative development projects that test emerging ideas to labour market challenges. To learn more about the fund, read the story from Communitech News.

Technology will transform the workplace as we know it. To help ensure Canadian workers, organizations and communities continue to flourish, Communitech has allied with a group of community partners – including Waterloo EDC – to launch the Waterloo Region Future of Work and Learning Coalition. Their work together will address topics of skill adoption, training and healthy workplaces. To learn more, read Communitech’s official press release.

Melanie Joly, the federal Minister of Economic Development and Official Languages, made a visit to Communitech at the start of December. The Minister participated in a roundtable with local community leaders and businesses where she applauded and endorsed Communitech’s unique, exemplary model. Read the coverage by Communitech News.