ATS Automation is one of Waterloo’s most successful companies – that’s saying a lot for a community with a global reputation for tech.

In Canada’s largest robotics and automation cluster – yes, we have 90+ companies that fit the description – ATS is the undoubted giant. The company has more than 5000 employees around the world, serves a global market and had revenues of more than $1.4 billion in 2020. They develop solutions for everything from food and consumer products to transportation and energy.

In 2019, they announced plans for a $60 million global expansion that included more manufacturing, office and innovation capacity in Waterloo. They aren’t done growing, especially with automation becoming a central feature in manufacturing reshoring efforts around the world.

What keeps this company growing in Waterloo? We asked Simon Drexler, the General Manager of Automation Products at ATS Automation, about Waterloo’s talent, culture and the opportunity our community presents to advanced manufacturers looking to incorporate new technologies.

Q: ATS Automation is a significant company – but it was once a startup of sorts. Why was the company started in Waterloo Region?

DREXLER: First and foremost, it’s about access to really great people, no matter what you're trying to do in a business, it all starts with people. And then there’s market access – we’re within a one hour's drive of the engine that drives the Canadian economy. It’s a natural placement for a company that serves manufacturers and needs high-skill talent. 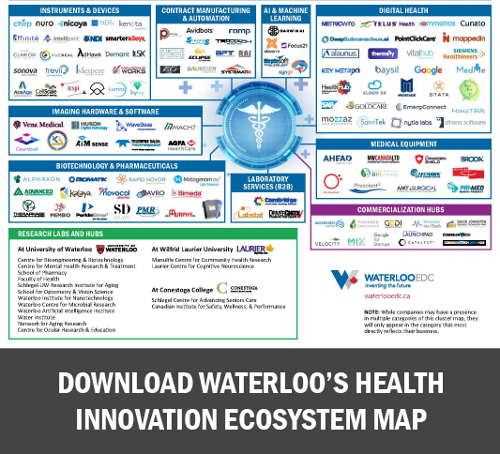 DREXLER: This is our headquarters. This is where the company was founded. We wanted to continue to expand on what our core competencies are and they're driven out of our headquarters (but by no means is that the only place that we do these things). The expansion here provides a central place – our brand new innovation centre – that really illustrates ATS’s commitment and belief that innovation is at the heart of what we do. We needed to give our team of very creative problem solvers a place to go and drive our technologies forward.

DREXLER: I think the University of Waterloo is so special for probably three reasons. First, it focuses on developing practical, technologically sound engineers – this is the foundation of what makes UWaterloo Engineering so special. Second, the co-op program is something that ATS and a lot of companies in Waterloo Region use to access to some of the best engineering talent in the world, while encouraging the incorporation of new engineering ideas while training the next generation. Third, I think UWaterloo itself is just a very innovative university. I'm not sure that they get enough credit for the fact that they've consistently iterated and innovated on the engineering curriculum itself. And it started with systems design engineering, but then came nanotechnology and a whole host of new programs. They're constantly trying to push the envelope of what comes next.

Q: We also have Conestoga College in the area. It has a ton of programs focused on manufacturing, robotics, automation and more. According to LinkedIn, there are hundreds of Conestoga College graduates working at ATS Automation. Can you expand a bit on the importance of these graduates?

DREXLER: Yeah, it's about balance. The University of Waterloo gets a lot of credit, and rightfully so, for engineering. Conestoga is an engineering powerhouse, too, and brings a different lens to engineering problems. That diversity is important, especially when we start talking about the integration and creation of industrial automation. The amazing thing about automation is it's the amalgamation of so many different pieces of expertise, there is the obvious parts where it's electrical design and mechanical design and software coming together to create something but then there's also the supply chain and the quality control and the electrical wiring and all of the different supporting functions. They culminate in the amazing moment of turning the piece of automation on for the first time and bringing something to life.

Q: What about the experienced workforce? The people who are already working here?

DREXLER: I think the depth of expertise in the workforce is the reason why there is an automation ecosystem in Waterloo Region. That amount of talent and expertise has been cultivated over time, because there are a number of large companies – large manufacturers – located here and a growing automation community.

Q: Waterloo’s international reputation is built around tech – BlackBerry, OpenText, etc. Is having a strong tech community important in automation?

DREXLER: The automation world is all about innovation and problem solving. It’s the same in most tech companies. Inside of the custom automation world, we solve very complicated, challenging, technical problems, and we use the best technology and the best minds in the world to solve them. So, having large technology companies here just strengthens the ecosystem. It means we have more problem solvers, more technical expertise, to draw from.

Q: We recently released a new ecosystem map that highlights the 90+ companies working in robotics or automation in Waterloo. It’s everything from automation integration to machine builders to machine vision. How important is that depth for other automation companies?

DREXLER: I think the depth and the breadth that the Waterloo community offers should be attractive to any company that wants to come and join us, you know, automation or not. Automation is such a multi-disciplinary problem that you need access to people, teams and companies that know how to collaborate and know how to bring their expertise to the problem at hand.

Q: What about manufacturers who aren’t working in automation, but want to incorporate it into their operations?

DREXLER: For a manufacturer that's looking to set up new automation there's no better area than here in Waterloo. It is built for advanced manufacturing, you have access to some of the best engineering talent in the world, you have access to some of the best automators in the world. And with the progression of manufacturing going the way that it is, we know that advanced manufacturing is the way of the future. So why not locate right next to the ecosystem that is best positioned to help you scale and grow your business?

Q: Last but not least, we toss around terms like collaborative culture to describe Waterloo all the time. Is collaboration more than just a buzzword in Waterloo?

DREXLER: I think we've got something special in the business community inside of Waterloo. And it is about that collaboration because even where you do see, you know, potential competitors, or somebody who might share in your space, I think there's a real and genuine belief that we're better off helping each other out and growing the larger pie. And I think that's something that's unique to the culture of the area.

Want to learn more about the unique Waterloo advantage for tech companies? Check out our website!